Emergence of CLM Funding in the Recent Past

Today, Contract Management is the most successful branch of the legal tech industry next to eDiscovery that is seeing exponential investment because of the emergence of CLM requirement by corporates, ALSPs & law firms, and of course high rate of adoption of the CLM systems by the users leading to increase in new CLM SaaS companies across the globe. The competition has increased with vendors leveraging emerging technologies such as blockchain and AI to provide a seamless and intuitive experience to the users. 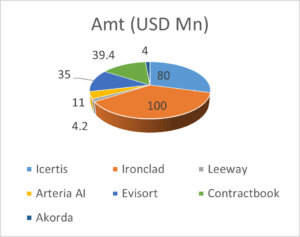 During early 2020 & mid 2020, a significant number of investments were also made in the CLM space. The no-code Contract Lifecycle Management system Agiloft raised $45 million in a growth equity investment by FTV Capital. Indian CLM company SirionLabs raised $ 44 million in a Series C round lead by Tiger Global and Avatar Growth Capital. Also, LinkSquares has raised $14.5 million in a Series A round by Jump Capital, First Ascent Ventures, MassMutual Ventures, and Hyperplane.

It is also quite evident that multiple venture capital funds like Tiger Global, Sequoia Capital, Y-Combinator, Bessemer Venture Partners, Avatar Growth Capital are heavily investing in the legal tech space wherein some invested a lot in the CLM space itself.

While we are discussing a lot about the CLM funding and the development around CLM across the globe, progress in the Indian sub-continent cannot be over-looked. Multiple CLM companies have emerged in India during this phase including Contractum by Quant LegalTech, SpotDraft, Razor 365 by Practice League, Sirion Labs, The Legal Capsule, Komtrakt by Lexplosion, Avacom by Avantis etc.

What drives the traction of investments and whole lot of attention for CLM?

Before we dive further on this, we need to understand what CLM system is? CLM is an end-to-end Contract Lifecycle Management system which is leveraged to track and manage every aspect of a contract for its initiation, performance, compliance, and other success factors and through every stage of the document’s lifecycle (from execution to renewal or expiration) on a single platform. The management process itself begins when a contract is proposed and continues throughout the delivery of the promised good or service and into contract renewal, automates and streamlines contract processes during all the key stages.

“Corporate legal departments need to do more with less, and tools and technologies like these can achieve the goal of faster, better, cheaper contract management,” as stated by Dan Jansen, CEO and managing director of Nextlaw Ventures, the legal tech-focused venture capital operation whose first investment round was funded by what he called a “significant” investment by law firm Dentons.

While the evidence of CLM demands are multi-faceted, let us understand them one by one.

Contract lifecycle management is a complex topic with growing demand for cost efficiency, contract analytics and intelligence, access from anywhere, swift collaboration etc. It entails intricate processes with numerous data dependencies that are difficult to monitor manually but very much relevant to business and strategic decisions. This is nearly impossible to monitor meticulously unless assisted by a CLM system. This augmented demand has resulted into arrival of several CLM systems across the globe and the subsequent fundings. In this growing World, we foresee that the trend will continue, and the saturation is not going to occur soon.

Back to the blog